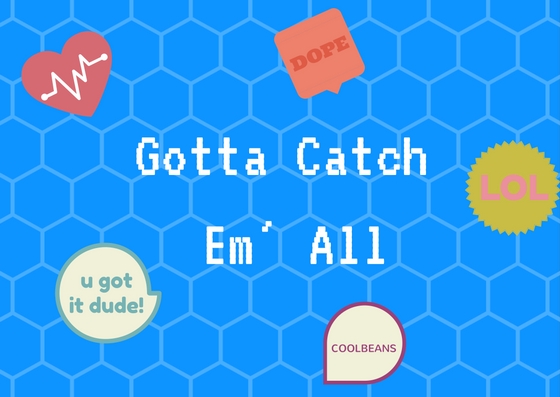 Everyone has their catchphrase. There’s little Michelle from Full House with her, “You got it dude!” and the guy at the variety store who likes to respond to everything you say with “for sure” paired with that nonchalant shrug of the shoulders that would make any tween swoon. I, for one, have picked up so many catchphrases throughout my life… some lasting months, others lasting an embarrassing few days. Here, I document my catchphrase evolution.

Before the judgment begins, I was just starting to find my way in this crazy, crazy world. Trying to push past my guise as the studious Asian, with the button down cardigan and orange glasses. “Fo shizzle my nizzle” was my way of injecting a little bit of funk and liveliness into everyday conversation. I liked different and weird and colourful and sometimes it even made me feel straight up gangster – there, I said it.

Middle school
Catchphrase: Honestly?
Sentence format: ‘Honestly? How could you.’

This was usually spoken in an accusatory tone when one’s science class Beta fish was hijacked, or a sparkly pen had suspiciously gone rogue. I remember the specific moment this started catching on amongst my friend group. I wasn’t on board with someone’s suggestion, to which they responded with: “Ugh, honestly Monica? Whatever.” I felt a mixture of anger and smug satisfaction after hearing these words. But mostly satisfaction – my 6th grader influence was spreading and it felt great. This catchphrase was so long lasting, I like to equate its legacy to that of Cher Horowitz’s iconic, “ugh, as if!” Because if there’s anything fetus Monica and Cher have in common, it’s that unapologetic sass.

Alright guys, let me set the record straight on the word, “super.” At the time, no kid actually used this word (at least, not in my part of town). It was still trapped away in a different era, and I felt rather quirky and cool for using this quite unusual word at the time. My enthusiasm for this adjective plummeted once it reached the tween masses a mere few years later…every young gal had this word on the tip of her tongue and I just wasn’t having it. As for “cool beans” I still use it to this day. At this point, it’s no longer a catchphrase, more like a way of life. Living cool, eating beans (as one should be).


I’d like to forget this shameful, shameful day but unfortunately, technology makes these things hard to forget. On a balmy, September day, I made the bold decision to make “dope-tastic” my thing. I apologize to those whom I snapped, announcing my new favourite phrase. In my bumbling eagerness, I vocalized these syllables so often that day, they were squeezed dry by the time dinner was ready.

Every now and again, I think fondly back to that day. Such unrestrained, intrepid enthusiasm for a word that should only be written in a style found in the “funky fonts” section of google.

As someone who does not curse, I have surprised myself by joining the ‘AF’ bandwagon. At first, like all things, it was used ironically. This quickly turned into a phrase I used all the darn time. Knock it off brain, you’re better than that; we’re sophisticated adults now that eat vegan cheeses and the occasional Kale leaf.

In terms of ‘peacing out’, I feel like this is a more recent thing. It just feels so natural, you know? Can’t fight that feeling.

Anywho, what about you guys? What sounds have you been verbalizing into this gloomy world? Any thoughts on how big of a dork I am?

2 thoughts on “My Catchphrase Evolution”